For some 2019 may bring in new goals such as losing weight or reading more, but for Gopher football, the goal remains the same. Except this time, it has a favorable shot at not only making it to the Big Ten Championship game, but making some noise along the way.

After nearly two decades of mediocre and unimpressive play, Gopher football is changing. Whether they are “changing their best”, “rowing the boat” or becoming “elite”, PJ Fleck is building a beast to be reckoned with. They finished the 2018 season with a final record of 7-6 after thumping Georgia Tech by a score of 34-10. After that game, redshirt freshman and MVP of the Quick Lane Bowl, Mo Ibrahim, stated, “We have a bright future for sure. We’re all coming together as a team right now so any win is huge.” 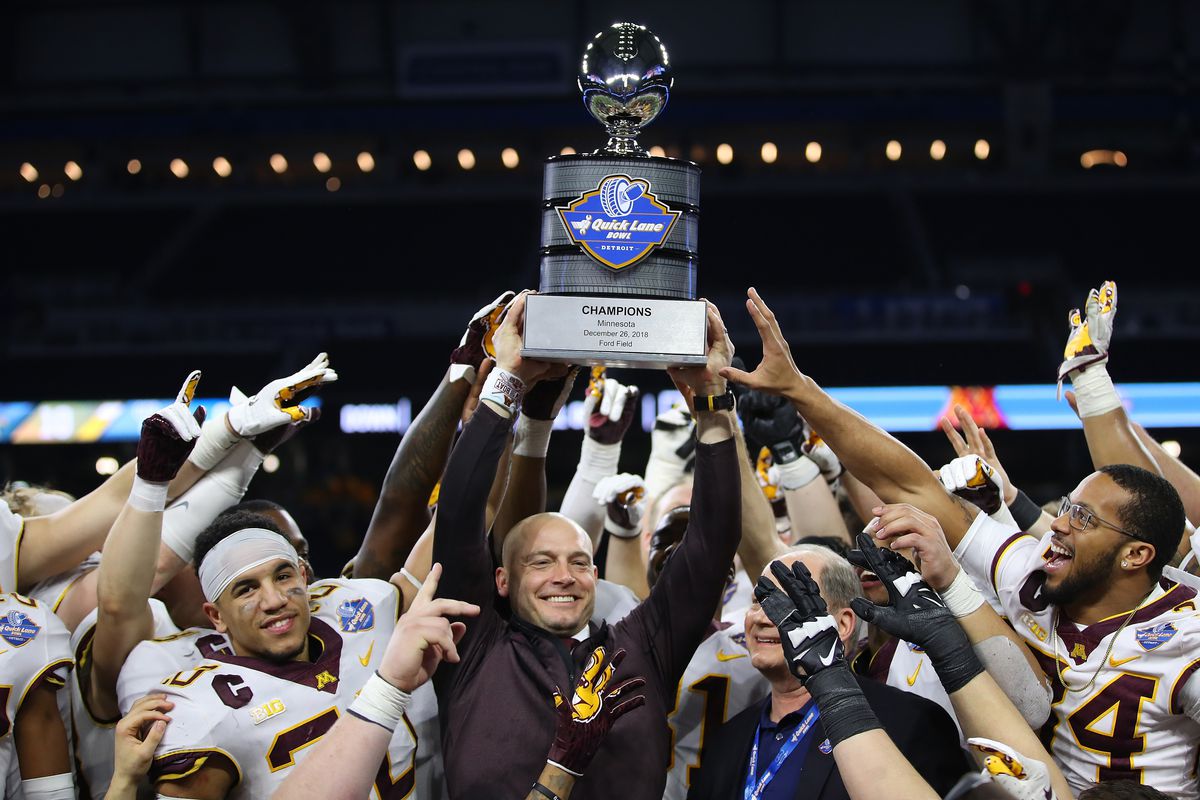 Fleck hoists the Quick Lane Bowl Trophy as they leave the Motor City as winners. Photo Credit to Gregory Shamus/Getty

To say the future is bright, as the star running back said, is putting it lightly. An eye opening 87.5% of the roster’s talent returns for next years season. From returners to award winners, next season’s Gopher football program will be loaded with talent up and down the depth chart.

The offense returns nine of their eleven starters and seven of those will be sophomores or juniors come next fall. Amongst those returners is current junior Tyler Johnson who will enter his senior season as the single season leader in touchdowns and receiving yards for a Gopher wideout. The Minneapolis native could very well declare to enter the NFL draft, but signs point to him coming back for his senior campaign. Lining up opposite Johnson will be All-Big Ten Freshman Team standout Rashod Bateman. Bateman burst onto the scene in 2018 with 51 receptions for 704 yards and six touchdowns. The duo of Bateman and Johnson could contend to be one of best duos in the Big Ten next year. It is been quite some time since Gopher fans could consider that a viable statement about a pair of their wideouts, especially in recent memory. No shade to KJ Maye or AJ Barker, but Johnson and Bateman are just on another level than what the Gopher faithful are accustomed to seeing. It’s also worth noting that soon-to-be sophomore, Chris Autman-Bell, had a quietly solid season behind the two standouts above him. Autman-Bell had only four fewer catches and 79 yards than AJ Taylor of the Wisconsin Badgers. Taylor was Wisconsin’s leading receiver. Returning two Big Ten standouts in Johnson and Bateman might not even be the best position group of the offense.

Tyler Johnson celebrates with Colton Beebe after Johnson hauled in yet another touchdown in his record-setting season. Photo Credit to Leon Halip/USA TODAY Sports

Ibrahim was a catalyst of the Gopher offense as he finished his freshman season with over 1,100 yards rushing, making him one of three freshmen to ever rush for 1,000 yards in their first season. Coming back with the freshman sensation are seniors Rodney Smith and Shannon Brooks. Smith was expected to be the focal point of the offense this year, but his season was cut short to a knee injury in nonconference play. Shannon Brooks will also be back as the three-headed monster of Ibrahim, Smith, and Brooks all look to wreak havoc for Big Ten defenses. Producing running lanes for the trio of backs will be an offensive line that impressed this past season, especially down the stretch.

The offensive line, which is made up of mainly underclassmen, allowed only 26 sacks this season. In fact, each member of the starting offensive line was named an All-Big Ten Honorable Mention by the media. Although the big boys up front will lose Donnell Greene and Jared Weyler next season, beefing up the offensive line has been one of Fleck’s main goals, and and the progression that department has showed. Projecting next years offensive line, (starting at LT and going across) I see Jason Dickson, Blaise Andries, Connor Olson, Curtis Dunlap, and Daniel Faalele. You’ll notice that junior Jason Dickson is a new name. Twin Cities media have said that Dickson has performed well during practices and scrimmages. He should be able to step right in and continue the strong play from the tackle position that the offensive line looks to carry into 2019.

Freshmen Daniel Faalele, Zack Anexstad, and Mo Ibrahim were all major factors in reaching a bowl game in 2018. Photo Credit to Gopher Sports

The quarterback position will make or break this offense. Tanner Morgan and Zack Annexstad played fairly well in their debut seasons. By adding their stats together, the two freshmen combined for a completion percentage of 55.25%, while tossing for 2,678 yards (6th in the Big Ten), and 18 touchdowns. The Gophers are also bringing in 4* Jacob Clark and 3* Cole Kramer, and the duo should certainly provide some depth to the position room. There have also been rumors that the Gophers will be interested in former Buffalo Bulls QB and potential NFL draft pick, Tyree Jackson. Jackson, who stands at 6-7, has an absolute cannon for an arm and also has been clocked with a forty time of 4.52. That is cooking. In comparison, former NFL MVP and Carolina Panther Cam Newton stands at 6-5 and was timed with a 4.59 forty yard dash time. Jackson was heavily recruited by Fleck out of high school and it is said that the two have a tight relationship. Jackson has entered his name into the new transfer portal which now allows all schools to contact him for his final year of eligibility. No matter who is behind center, the quarterback position could be the very reason the 2019 Gopher season is a massive success or a devastating failure.

On the defensive side of the ball, all three levels are littered with potential NFL talent. Throughout the last four games when Joe Rossi took over as defensive coordinator, the defense only allowed 14.75 points per game, which would’ve ranked first in all of the Big Ten by a sizable margin (2nd would be Michigan, allowing 17.6 points per game). Granted, that was only four games, but that was against two top five offenses in the Big Ten (Purdue and Wisconsin). Also in those four games, they allowed an average of just 139.75 yards on the ground and 160.25 yards through the air. That would’ve ranked as arguably the top defense in all of the Big Ten as that rushing defense would’ve ranked as the 5th and the passing defense would’ve been 2nd best in the conference. As the defense returns the core of it’s attack in Carter Coughlin, Antoine Winfield Jr., Thomas Barber, as well as a plethora of other starters, the defense has a realistic shot at maintaining their impressive numbers. To add to their standout defense, coach Fleck has brought in some of the top defensive line talent the program has ever seen in Rashad Cheney and Kristian Williams, both of whom are touted as the highest rated d-line commits the program has ever had. 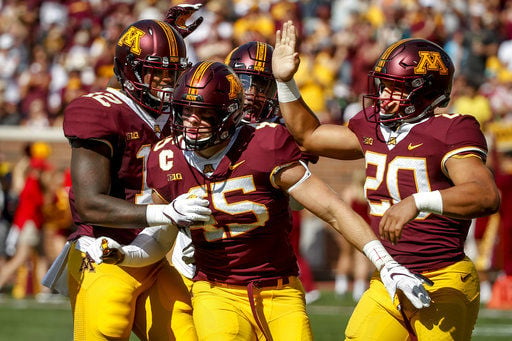 Carter Coughlin (45) was tied for 1st in the Big Ten in sacks and has said that he will return for his senior season. He will be a key factor in the 2019 Joe Rossi led defense. Photo Credit to Bruce Kuckhohn/AP Photo

Along with the significant amount of returning talent, the schedule for the 2019 season has Gopher fans licking their chops. The season kicks off as they welcome the South Dakota State Jackrabbits, followed by a trip to Fresno State and a home matchup with Georgia Southern. They open Big Ten play in West Lafayette, Indiana with a matchup against the Boilermakers, and then have two home games against Illinois and Nebraska. From there, Fleck and his crew make a quick trip to Piscataway, New Jersey to visit Rutgers and then hurry back home for games against Maryland and Penn State. They wrap up the year with road games against Iowa and Northwestern, but finish off the season with a home game vs. Wisconsin to defend Paul Bunyan’s Axe. With the vast improvement over just the past two months, Gopher football has a legitimate shot to win ten games. To give you some perspective, the program has hit double digit wins twice, that being in 2003 and 1903.

This 2019 season could be the season that Gopher fans have been dreaming of. Not only would a ten-win year be fun, but there is a fair chance that it would have the maroon and gold representing the West division in the Big Ten Championship game. If Fleck and his staff can make an appearance in the Big Ten Championship game in just his third year, that would be quite the accomplishment. Now, am I saying that it’ll happen?  Not necessarily. What I am saying is that this year could be monumental for the program. Fleck has corralled top-40 recruiting classes while only totaling twelve wins in two years. Can you imagine what Fleck would be able to do on the recruiting trails with a ten win season and a Big Ten Championship appearance? I don’t even want to get myself thinking that far ahead, but, man, would that be interesting.

As Fleck enters year three, the program looks to take a major leap into the upper echelon of the Big Ten. Photo Credit to Brace Hemmelgarn

This upcoming 2019 season could be a standout year for those who bleed maroon and gold. If the ball can bounce the Gophers way, a successful 2019 campaign could catapult Fleck and his team into the upper echelon of Big Ten teams and could be the turning point in the Row the Boat era.